The following Mayoorites received [Top in the World / Top in Country] awards:

.      Four students of Mayoor School have won  the prestigious ‘Outstanding Cambridge Learner Award’ for their exceptional performance in Cambridge International Examinations in 2018-19.

The award recognises exceptional exam performance in 2018-19 under four categories – ‘Top in World’, ‘Top in Country’, ‘High Achievement Award’ and ‘Best Across’.

.           Two students of Mayoor School have won  the prestigious ‘Outstanding Cambridge Learner Award’ for their exceptional performance in Cambridge International Examinations in 2017-18.

·          Ms. Siddhi Bhatt, student of Class XII Humanities represented India at the 9th Commonwealth Karate Championship held at Durban, South Africa from 20th November to 2nd December 2018. She has taken part in Junior and Senior Kata and Junior Kumite events where she reached the Quarter Finals.

Abhimanyu was an active participant in the school plays. He acted in plays like -'The Death Trap' and 'Mother's Day'. He was a member of the Prefects' Council as the CCA Captain in the year 2006-2007.

·        Ms. Geetakshi Dixit (Former Head Girl, Batch of 2015) won a Bronze Medal in the 10m Air Rifle Team Event at Junior World Cup Shooting Championship held at Gabala, Azerbaijan from September 16 to 23, 2016. She has also represented India in the Junior Team at the Asian Shooting Championship held at Tehran (Iran) from December 3 to 9, 2016. Earlier in May she was selected for the Indian Rifle Shooting Team (10m Air Rifle Junior Women) and participated in the 'Meeting of Shooting Hopes' competition held in the Czech Republic.

·         Mr. Puneet Mishra (Head Boy, 2016 Batch) captained the U-19 Rajasthan Cricket team at the 61st National School Games and Sports Competition which was held at Indore (M.P) from 19th to 24th November, 2015. The team reached the semi-final in the National Tournament.  Puneet was the highest run scorer from the Rajasthan team. Earlier, he was appointed the Captain of the Ajmer District team which won the State level Tournament.

·         Mr. Abhilekh Parashar of the Batch of 2012 was felicitated by the Rajasthan State Sports Council with the Maharana Pratap Award for his outstanding performance at the National level in Gymnastics.

·         Mr. Soumayadeep Roy, formerly ranked no.1 in India in Table Tennis received the Arjuna Award for Table Tennis in 2006. He is currently the coach of Indian Table Tennis Team.

·         The school was presented the ‘International School Award’ instituted by British Council for the fourth time in a row for outstanding development of the International Dimension in the Curriculum (2018-21).

·          Ms. Tushmi Udyalak with 99% marks in the Humanities stream was the Ajmer district topper and she has set a new record for the highest aggregate percentage in class XII  for the school. She scored 100% in Fine Arts and Hindustani Music.

·          6 Mayoorites, Nitya Chowdhary, Ria Jain, Abhijaat Soni and Gauri Agarwal were felicitated on 15th August 2018 while Kartikeya Bhandari and Gaurang Bhardwaj were felicitated on 26th January 2018 by the District Administration at Patel Stadium, Ajmer for having excelled in various sports.

·          The school was felicitated with the ‘Future 50 Schools Shaping Success’ Award instituted by Fortune Magazine for our International Curriculum.

·         Former Principal, Shri Neeraj Kumar Bedhotiya was awarded with the National Award for Teachers which was presented by the President of India.

·          Ms. Geetakshi Dixit (Head Girl, 2015 Batch) was selected for the Indian Rifle Shooting Team (10 M Air  Rifle Junior Women) and represented India in the ‘Meeting of Shooting Hopes’ competition held in the Czech Republic from 26th to 29th May 2016. Geetakshi has made Mayoor School proud by her record breaking performance at the  59th National Shooting Championship held at New Delhi from 1st to 15th December 2015. The following are her achievements:

It is commendable that she was just one point behind the Commonwealth Gold Medalist Ms. Apoorvi Chandela. In the Junior Category she created a new national record with 414.4 points.

·          The British Council awarded Mayoor School under the Category of “Innovative Projects Implemented in a Partnership-Primary” as part of School Partnership Honours Programme on 19th November, 2012.

·          Mayoor School was declared the winner in the Northern Zone, of the Paper Recycling Project under the Great Banyan Project of the British Council in 2011. The School collected a total of 6013 kg of waste paper to emerge the winner. 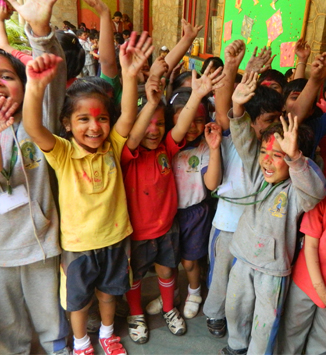 “Other than giving me education and great friends for life, Mayoor has given me values and taught me much more outside the classroom, gracefully shaping me into a confident, mature and a responsible person.”
–Geetakshi Dixit
Ex-Mayoorite, Head Girl 2014-15, National Shooting Champion