Sports Day was organised for the children of Pre-Primary on November 26th, 2016.The special highlights of the day were the colourful displays by the children which helped them to gain physical fitness, boost confidence and build their self esteem. The children participated in many exciting activities in the form of Fun Races.

The tiny tots of Nursery balanced bean bags on their heads and clipped the clothes pinned on their own hats and wore them on heads to reach the finish line. This helped them to execute their gross and fine motor skills.

LKG-A showcased the characters of Tom and Jerry which helped them to learn about food chain.

LKG-B brought the circus alive on the tracks where children dressed themselves as clowns and entertained the audience with their funny acts.

LKG-C exhibited their reading skills and formed words of the objects kept on the chairs and the one who finished the word formation ran to the finish line.

LKG- D dressed themselves as masons and constructed their dream house along with their partners help using bricks and a trowel.

The entire UKG brought different community helpers and their tasks on to the tracks.

It was fun to see the UKG-B kids as barbers and shave the balloon as fast as they could.

UKG-C children made the audience nostalgic by showing the 'Postman Race'.

Yummy sandwiches were prepared and served by the UKG-A kids to their customers.

The children of UKG-D reminded the audience about ‘Swach Bharat Abhiyaan’ by showcasing the 'Cleaners Race'.

These races helped students to develop   coordination, agility and team work. The children were cheered and encouraged by the parents, teachers and guests.

At the end of the event, a fun race was also organised for the parents to invoke enthusiasm and fun among them as well as their little ones.  They had great fun watching their parents in action. The winners were gifted lovely Tea Coasters made by the magical hands of their children.

It was great fun to see the children, their parents and teachers all joining hands to make this event a huge success. 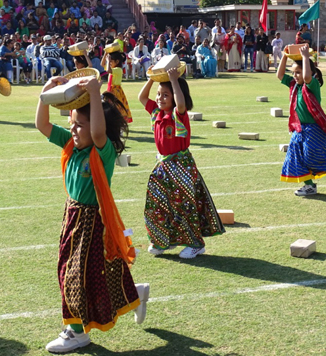 “The De Montfort School, Evesham, has had the great privilege of a close relationship with the Mayoor School, Ajmer, for almost ten years. In those years the relationship has flourished thanks to the commitment shown by staff from both schools. The joint projects undertaken have included Skype collaboration between Year 6 students, Geography projects with Year 9 and 10 and student exchanges in Year 12. These projects formed a significant element in The De Montfort Schools successful application for International School status in 2015 (made more special as the award coincided with a visit from Principal of Mayoor School, Ajmer, Mr. Neeraj Bedhotiya). There have also been several teacher exchanges through the British Council Connecting Classrooms which have helped to sustain the projects but, most rewardingly, developed deep and lasting friendships between the staff at both schools. The staff at The De Montfort School are grateful to Mr. Bedhotiya, without whose drive and enthusiasm the r”
–Andrew Denton
Assistant Headteacher, The De Montfort School