The XXXVI Annual Athletic Meet began today on 12th October 2017 with a few races and all field events like Javelin, Discus, ShotPut, Cricket Ball Throws, Long Jump, Triple Jump and High Jump. 9 previous school records were broken. All the four houses participated with vigour and great enthusiasm. The highlight of the day was the Inter - School 4x100 m relay race for boys and girls.

Click Here  for Day 1 Results.
Day 2
On 13th October 2017, the Second Day of the 36th Annual Athletic Meet, some of the track events like hurdles, 100m, 200m, 400m races and 4x100m, 4x200m, 4x100m (mixed) relay races were held. Two previous records were broken. All the athletes with their stellar performances raised the bars for the next ‘Athletic Meet’. The highlight of the day was the support staff race and all of them were felicitated by our Principal Shri. Adhiraj Singh.

The 36th Annual Athletic Meet came to a close with a colourful and spectacular Senior School Display, India and its diversity were celebrated through a vibrant representation of Indian regions.

On 15th of October, the 36th meet was declared open by the Chief Guest Lt. Gen. Surendra Kulkarni, PVSM, AVSM, VSM** (Retd), Director, Mayo College, Ajmer. Parents and Dignitaries were welcomed by our Principal Shri. Adhiraj Singh. The event was marked by a March Past by all the four houses, Karate, Yoga, Gymnastics Display and Rainbow Dance Drill.

Athletic events like 100 m, 200 m, 4x100 m relay and Parents' races were the highlights of the day. Prizes were distributed by the Chief Guest. The report of the 36th Annual Athletic Meet was presented by the Vice Principal, Miss Sindhu Chaturvedi and the Vote of Thanks was proposed by the School Athletics Captain, Riddhi Fatehpuria.

The coveted Badnore Cup for the Best House in Athletics was won by the Blue House and the March Past Trophy was bagged by the Yellow House. 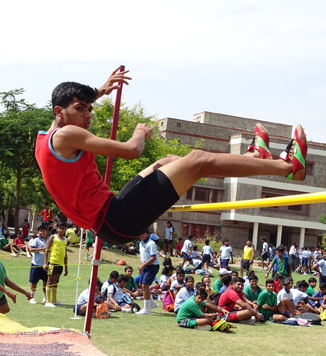 “Mayoor has given me everything, moments I'll cherish all my life, strength and character for future endeavours post school, a chance to explore cricket, dramatics, academics and diverse set of activities, and a life changing Australian experience. I'll always be indebted to my school and teachers for their efforts and support.”
–Saket Upadhyay
Ex-Mayoorite, Batch of 2012-13