Panache 2016 was a glamorous affair with the students and teachers walking the ramp with élan. The show comprised three rounds of costume and style display. The first round with theme "Bajirao Mastaani" echoed the style and costumes characteristically associated with the medieval Indian times, the second round was centered on smart casuals and the third round was traditional round where girls wore traditional Indian attire and boys were dressed in formals. The participants were judged on the basis of confidence, personality and presence of mind shown during the question-answer round. 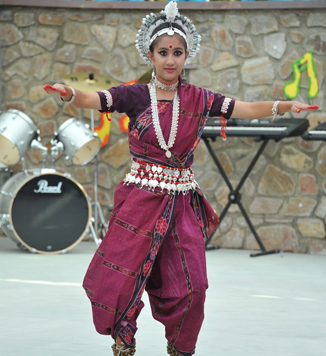 “In terms of my own professional development, the internship was invaluable and persuaded me to undertake a career as a secondary school teacher when I returned to the UK. However, above all else, the staff and students of Mayoor were friendly, warm and welcoming. They ensured our first visit to India was defined by happy memories and I very much hope to return in the future. We were proud to have been the first of many students to undertake this internship and cement the relationship between Murray Edwards College and Mayoor School.””
–Elizabeth Gould
Intern from the U.K. - 2015